Dr. Homer Stryker was an orthopedic surgeon that went on to invent many innovative medical technologies that lead to the founding of Stryker Corporation. Homer was born in Michigan in 1894. After graduating undergrad from Western Michigan University, he became a schoolteacher in the upper peninsula of Michigan. He then joined the U.S. Army and went on to serve in France during World War I.

After returning from war, Stryker decided that he wanted to pursue medicine. He was accepted to the University of Michigan Medical School, but he was unable to attend because he failed the foreign language exam. Stryker decided he would work to save enough money to pay for medical school tuition. He taught school, coached football, baseball, and basketball, worked as a barber, and pitched for a semi-pro baseball team while learning French. He passed the foreign language exam and started medical school in 1921. While studying to become a doctor, Stryker lead the University of Michigan baseball team to a Big 10 title as the starting pitcher!

After medical school, Homer Stryker interned at University Hospital and then opened a general practice in Kalamazoo Michigan. He then went back to the University of Michigan to become an orthopedic surgeon in 1936. Stryker was naturally curious and always looked for ways to improve the medical practice. 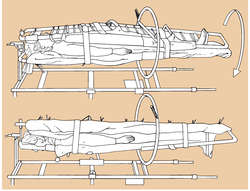 At Borgess Hospital, he practiced on the second floor and kept a workshop in the basement where he tinkered on inventions. His first notable creations were the wedge turning frame and the rubber walking heel. The wedge turning frame was the beginning of Stryker’s mission to improve the hospital bed; it allowed doctors and nurses to easily turn a patient in a bed, which helped prevent sores and blood clots. The rubber walking heel improved walking casts for patients by replacing traditional cast iron pieces. Rubber is easier to work with and much lighter for the patient to walk in. 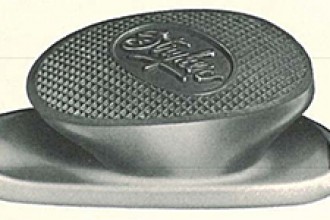 Stryker’s first two products came into high demand during World War II, so he ramped up his operation and began producing them at a higher pace. In 1943, Dr. Stryker invented his most famous innovation, the oscillating electric saw. The saw oscillates back and forth with many small teeth over a very short range of motion. The design causes the blade to interact differently with a rigid cast and a patient’s soft, pliable skin. The rigid cast strongly resists the cutting motion, so the blade cuts right through, whereas the patient’s skin essentially attaches to the saw. Since the force is spread out among many blade teeth and the oscillation is so short, the skin is able to move back and forth with minimal damage. 1946, the Orthopaedic Frame Company was founded by Stryker to continue producing products to help medical professionals and improve the patient experience. 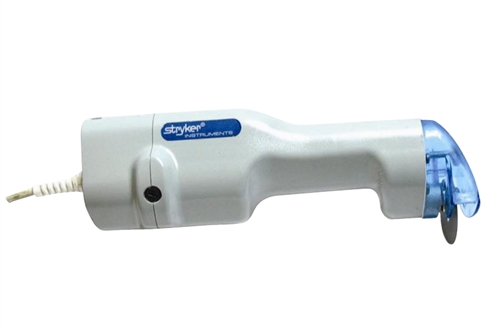 The company shortly re-located to Kalamazoo and hit the one million-dollar sale mark in 1955. Today, The Stryker company name is world renowned, but it was not until 1964 that the company’s name was changed to this.

Stryker’s family was also very involved in the company. His wife, Mary Jane Underwood was originally his French tutor that helped him get into medical school. She helped sew the canvasses that were used in the original turning frames. Their son, Lee joined the company and became president and CEO by 1969. Lee and his wife tragically died in a plane crash in Wyoming in 1976. Dr. Homer Stryker passed away in 1980, but Stryker Corporation lived on.

The company continued to grow to a multi-billion-dollar enterprise that now employs over 33,000 people. Stryker, today, still sells innovative hospital beds and oscillating saws. However, the portfolio has grown extensively to include multiple facets of medical and surgical equipment, orthopaedics, neurotechnology, and training and education. A few of Stryker’s most notable products include implants used in joint replacement and trauma surgeries; surgical navigation systems; endoscopic and communications systems; patient handling and emergency medical equipment; and robotic surgery arms.

Dr. Stryker’s life is an inspiring story of excellence, perseverance, and curiosity. Perhaps the most important lesson we can learn is that everything can be improved. Don’t be afraid to think outside of the box and change something like Dr. Stryker did with many medical technologies.